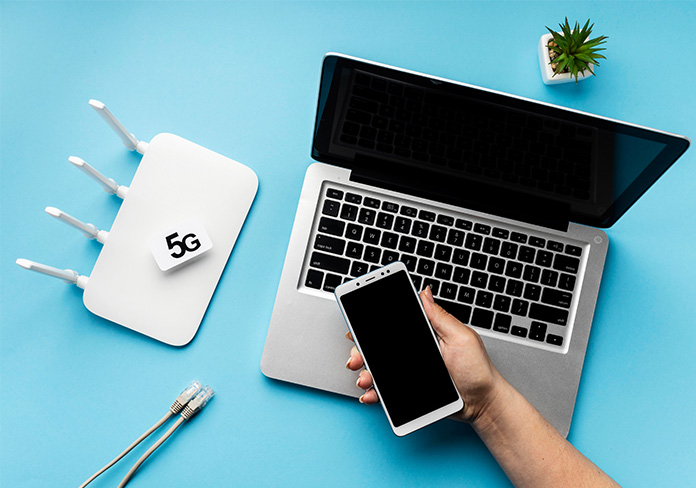 A substantial technological transformation is taking place all over the world. Innovation, dexterity, and market development are all accelerated by technological advancements.

The Covid-19 has accelerated digitalization and automation, allowing businesses to remain resilient during adversity. Many companies adopted disruptive innovation technologies and improved their business models.

There will be a significant impact of the pandemic on the digital transition for a long time. If companies do not keep up with technological trends, it will be tough to stand out in the competitive world. Advanced technology will continue to alter our lives and the way we function, opening enormous opportunities for organizations worldwide.

Let's look at some technology developments to look for, adopt, and take with them.

Artificial Intelligence has made much hype over the past decade. Still, it remains one of the major emerging technology developments as its significant changes impact how we live, work, and play with its inception.

AI is well-known for its presence in image and speech recognition, ride-sharing apps, mobile personal assistants, navigation apps, and various other applications.

Besides that, Artificial Intelligence investigates interactions to find previously undetected connections and evaluate facility demand in real-time to assign resources and identify dynamic patterns among users.

Machine Learning, a subset of AI, is primarily used in a wide range of industries, resulting in a surge in the job market for skilled professionals.

2.5G and its enhanced connectivity

Faster and stable Internet signifies rapid loading of webpages and spending less time waiting for them to load. Since 3G, every advancement of mobile connectivity has opened the door to new internet use cases.

As the bandwidths expanded, 3G enabled online access and data-driven services on mobile devices. 4G authorized the increase in streaming of video and music platforms, and 5G would expand what is possible in the same way.

5G refers to the networks that use cutting-edge technology, including the augmented reality and virtual reality.

They also jeopardize rendering cable and fiber-based networks obsolete by requiring us to be tethered to a specific location.

In brief, 5G and the other advanced, high-speed networks allow all the different trends that can be accessed anywhere, at any time.

Complex machine learning applications are required for real-time access to Big Data sources to automate and run in the field.

Edge computing is a new technology that secures low latency and high-speed data processing. It allows computations to carry out closer to the data storage systems by improving application performance.

The technology aims to run hardly any processes in the cloud and transfer them to places like the user's computer or an edge server.

It bridges the gap between data and computation eliminates distant communication between the server and the client, resulting in increased process speed.

The Internet of Things (IoT) is all about using data and insights to influence behavior. IoT devices are feasible as massive databases for Internet of behavior (IoB) paradigms.

Businesses can follow customer behavior using IoB to benefit from their respective channels. For instance, a health-tracking app may collect information about your physical activity routine, diet, sleep, and other habits.

This information is used to encourage more behavioral improvement, such as by creating personalized health plans.

Quantum computing is a form of computing that uses quantum phenomena such as superposition and quantum entanglement. It is following remarkable technology trends. Due to its capability to instantaneously question, track, interpret and act on data. It also includes preventing the spread of the coronavirus and developing potential vaccines.

Blockchain is another latest mainstream technology trend. Most people believe that Blockchain is just about Cryptocurrency, which is not the case.

Bitcoin and other Cryptocurrencies are just a subset of Blockchain technology. Apart from Cryptocurrencies, it is used in various other fields such as healthcare, supply chain, and logistics, advertising.

It has a decentralized digital ledger that tracks any transaction through a global network of computers.

Blockchain's amount of protection and transparency is the primary reason for its incredible rise in popularity.

Cybersecurity doesn't seem to be cutting-edge technology, but it progresses concurrently with other technologies. It is mainly due to the constant evolution of new risks.

Malevolent hackers attempting to obtain unauthorized access to data would not give in quickly. They continue to find ways to avoid the most stringent protective measures. It's due to the adoption of modern technologies to develop a defense.

Since Cybersecurity will extend to guard against hackers as long as we have them, It will remain a popular technology.

Human augmentation is a broad term that encloses innovations that seek to enhance human abilities and prolificity.

Physical augmentation, such as prosthetics, AR lenses, and RFID tags infused inside humans, constitute the field of human augmentation.

It can aid in the enhancement of human cognition, perception, and action abilities. It is achieved by sensing and actuation technology, information fusion and fission, and artificial intelligence.

The Distributed Cloud technology trend is designed to take Cloud Computing to the next level.

It distributes public cloud resources to varied geographical locations, processes, updates, delivery, and other suitable activities. These are handled mainly by the original public cloud provider.

Instead of offering a centralized solution, it assists in meeting the service needs of the individual cloud locations.

Meanwhile, businesses would undoubtedly gain from the technological trend by decreasing latency, reducing the prospect of data loss, and falling costs.

Technologies such as Artificial Intelligence (AI), the Internet of Things (IoT), and others alter large amounts of real-time data benefit from the Distributed Cloud technology.

Augmented Reality and Virtual Reality are two popular tech trends that have escalated in popularity in recent years and are expected to be trending in the coming years.

They operate in varied fields, including gaming, transportation, education, healthcare, and many others. For instance, Ed-Tech platforms are increasingly favoring Augmented Reality and Virtual Reality to improve students' learning experiences.

This year, these will be the top technology developments we should be aware of. All of these tech trends are interconnected in some way.

The arrival of the 5G tech trend would have positively affected IoT, AR, and VR, among other things.

As a result, you don't have to think about which technological trend is right for you to learn about the advancements. It would broaden your awareness and give you an edge over the competition by knowing about all of them.