Jilin TV Shows to Air in the UK

Jilin TV Shows to Air in the UK

LONDON, July 8, 2019 /PRNewswire/ -- Jilin (China) TV and Film Conference UK 2019 and the Cooperation Agreement Signing Ceremony between Jilin Province and Britain was launched in London on June 27th. The event is organised by the Information Office of the People's Government of Jilin Province, and hosted by China Intercontinental Communication Centre, Culture China Media and Propeller TV. 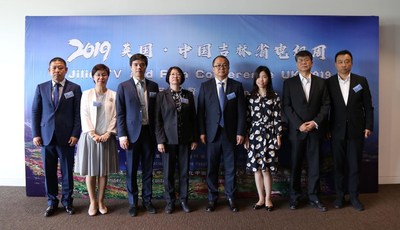 Attendees at the event include the Cultural Delegation from Jilin Province, a representative from the Chinese Embassy in the UK, CEO of Propeller TV and CEO of Vision 247.

During the speech at the launch ceremony, the CEO of Propeller TV stressed the great importance of the Jilin TV and Film Conference to the promotion of cultural exchange in TV and film industries, as well as the strengthening of mutual understanding between the people of China and Britain.

According to the leader of the Cultural Delegation from Jilin Province, recent years have witnessed frequent exchanges and communication between Jilin Province and the UK. Fruitful results and steady progress in economic and trade cooperation, culture, sports and tourism have been achieved.

At the ceremony, a Memorandum of Understanding was signed between Jilin Television and Propeller TV to strengthen international cultural exchange and cooperation. Jilin Internet Media Company and Vision 247 also signed a Memorandum of Understanding to enhance their international communication. All parties agreed to set up long-term mechanisms for cooperation in forms of resource sharing, visitation programmes and channel expansion to further support the media in both countries.

Propeller TV airs engaging Chinese and English bilingual content 24 hours a day, 7 days a week on mainstream British media covering over 10 million households in the UK. It is a full-media platform dedicated to the promotion of Sino-British culture and international culture communication. Through Jilin (China) TV and Film Conference UK 2019, 7 documentaries about Jilin province will be introduced to British audiences by Propeller TV.

During this visit, the cultural delegation of Jilin Province also exchanged opinions and experience with representatives from the BBC, The Telegraph and Film London via discussion on issues about film production and media integration, which provided valuable reference and inspiration for the future improvement of the international communication capacities of media in Jilin province.